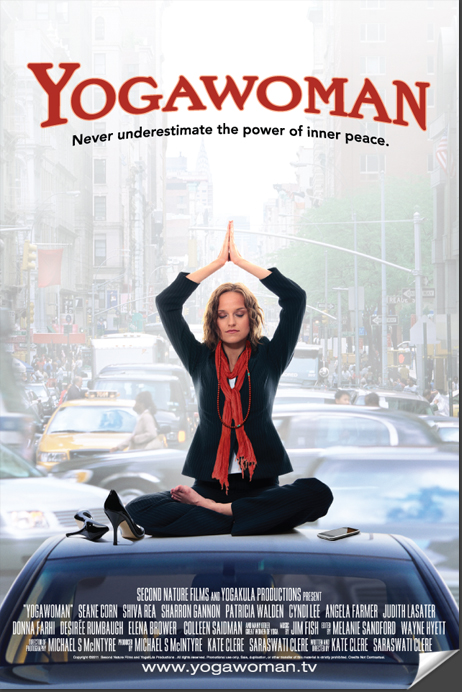 It was the day before Thanksgiving at San Mateo County’s Camp Kemp Juvenile detention facility. Holidays are always an especially rough time for girls locked up away from family and friends. At The Art of Yoga Project (AYP), we not only hold yoga and art classes on holidays, we try to think of special ways to inspire the girls. We decided a movie showing would be just the thing. And not just any movie, but one which they could personally relate to and see themselves in a new, hopeful light.

The film was Yogawoman, a groundbreaking, award-winning documentary narrated by Academy Award winner, Annette Bening, and now premiering worldwide. The talented trio of producers came to Camp Kemp three years ago to include AYP’s work in the film and follow the story of one girl in particular, Sayle, as she served her time and later transitioned home and into college. We couldn’t wait to see the girls’ reactions as they recognized Camp Kemp, their probation counselors, schoolteacher and AYP instructors in the film. We knew that some would even know Sayle. And we all knew that they would relate to yoga – because girls at Camp Kemp practice yoga four days a week as a mandatory and integral part of their rehabilitation. Four days a week for an average of six months plus our aftercare program for another year can certainly create a life-long discipline for health and well-being. We looked to Yogawoman to help the girls further understand why we bring this beautiful practice to them and the way it can transform their fractured lives.

On this day, another long-time AYP teacher, Jessica Archer, and I brought bags of kettle corn and rearranged couches to set a cozy space in their otherwise austere setting. We met with facility staff for an update on the girls, carefully laid out napkins and journals. Then we quietly set our intentions for the session, knowing the usual challenges that come in this environment.

Twelve teen girls filed in, found their seats and, as is our usual practice, were acknowledged and honored by Jessica and me individually by name. Before long, every one of the girls was very engaged. They began to stir and make comments and Jessica and I, both teary, smiled at each other knowing the girls were interested and inspired:

Quite simply, the film broadened their world. It inspired travel, service, empowerment and compassion and, as we see consistently in the yoga room, it brought out the best in them. Many of the girls made comments that showed their deepened commitment to the practice  “I can do that pose.” “I’m going to try that.” “ I want to do yoga for a very long time!” “ I want to do yoga on the outs.” “I’m going to teach my mom AND my grandma yoga.”

After the movie, we asked the girls to journal to the prompt: “Yogawoman is….”

They each shared their answers aloud.

Next, I asked the girls “Are you Yogawoman?”  There was a resounding “Yes!” So for our closing, each girl, one at a time, substituted “I am” for “Yogawoman” in her answer above. It was powerful:

“I am an inspirational person. I pick myself up when I fall. I am in tune with my body. I am a strong, confident woman. I am beautiful even if I have been ugly.  I am someone who loves herself…”