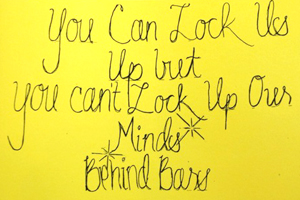 I had the privilege of working with seventeen girls in Pine Four at the Youth Services Center in San Mateo–thanks to The Art of Yoga Project and the Palo Alto Children’s Theatre.  I taught creative writing to the girls for a total of five amazing weeks.  Each session, one by one, they were let out of their rooms, which surrounded the lobby we met in.  As soon as I saw the first two girls on the first day, I knew I was meant to be there.

Mats were laid out in a circle, like the rays of the sun, and we did a series of yoga poses to center ourselves and access our creativity.  Then the writing began.  The poetry and stories the girls wrote were honest, heartfelt, and powerful…and healing for all of us.

Since I have compiled four anthologies of teen writing published by Candlewick Press, I read a few poems from those books as a jumping off place each week.

The first week, I read a poem from my anthology, You Hear Me? poems and writing by teenage boys.  It was by a boy from Detroit who listed what he wanted in his life.  Then the girls wrote about what they wanted. One girl said she didn’t know what she wanted, was afraid what she wanted was bad for her, but she managed to write a beautiful poem.

One girl who said she was hella bored when she checked in about how she was feeling, wrote and wrote and wrote.  She said she wanted what could never happen. So another girl made up a motto for all of us that “the impossible is possible.”

A handful shared their poems in their entirety and then each poet wrote two lines from her poem on a small paper.  I collected them all, shuffled them, and read them as a collaborative poem, anonymously.

[poem by a girl in week one]

I want to be free

There were 8 girls.
We bonded.

The second week, I read poems from You Hear Me? and Falling Hard, 100 love poems by teens.  The girls wrote their own poems using these poetry prompts:
Just because _____, doesn’t mean _____.
and

One girl announced that she’d been waiting all week for the writing session.

We all snapped after every girl who volunteered to read.  They introduced me to snapping instead of clapping.

I told them they were the wisest class I’d every taught and one girl said, “You’d be surprised what happens when you put someone in a cell.”

[poem by a girl in week two]

Just because I am the way I am doesn’t
mean I don’t have a bad past.

Just because I was molested at a young age
doesn’t mean I’m going to let my daughter go
through the same pain.

Just because I cry about it doesn’t mean
I’m going to let it bring me down.

Just because I don’t say anything
doesn’t mean it doesn’t hurt.

Just because I don’t love my self ’cause
my past doesn’t mean I can’t love you.

There were 12 girls.
We got closer.

WEEK THREE
The third week, I read poems from my anthology Things I Have to Tell You, poems and writing by teenage girls.  The poetry prompts were:

I am grateful…
and
I am…

When I read the collaborative poem using two lines from each of the girls’ poems, the new girl asked,” Who wrote these?”  She was amazed at the power of the words and that they had come from the girls surrounding her and herself.

I’m a box full of secrets.
I’m a star that doesn’t shine because I’m dusted with shame.
I’m all my broken thoughts waiting to be heard.
I’m always trying to run away from
myself unconsciously and consciously.
I’m everything to someone, yet nothing
to myself.
I’m a lost soul floating around
confused waiting to be found.
I’m forever killing myself with any
substance I can find because
I’m all pain inside.
I’m a robot following patterns of craziness
and thrills that temporarily make me numb.
I’m a person trapped in a mind that
controls me afraid to let me go and see
the real me.
I’m something I don’t like to feel so
I keep hiding my face, repeating my lines,
tricking my pain, mistaking happiness for
adrenaline, ignoring all my feelings, doing my
drugs.

There were 10 girls.
Some had been released.
It was intense and wonderful.

The fourth week, I showed them how to draw up their energy in order to write-–by rubbing their faces and arms and filling themselves with light.  I told them they could write, no matter if I was there or not.  I gave them a message from my son, James Franco: “Find something you love to do and work hard at it.”

I read some monologues from my book, 21 Monologues for Teen Actors, and they wrote very short stories about their lives.  I explained that there are so many genres to write in.  Sometimes you can write intense feelings, sometimes uplifting memories or stories.

Writing has a “magical” power, and the girls began to inspire themselves.  That’s what we found out, along with the fact that even the impossible is possible.

There were 13 girls.
We learned more about each other.

The fifth week, each girl picked a poem and performed it beautifully and proudly in the Pine Four Poetry Slam.  We pretended they were being filmed and I taught them some performance skills.  My actor son Dave Franco sent them a message “to breathe and relax and they would perform well.”  One of the poems made the reader cry and made us all cry.  Everyone was courageous and read their very personal poems to the group.

These are the Pine Four Writers.  They are writers, and they will keep writing.

You should feel privileged that you get to read about them and that they are willing to share their poems in this blog.

I want to hit reality
I want to open my eyes
I want to be free
I want for people to care.
I want to meet Betsy’s son
I want my life to change
I want a man I can make my husband.
I want respect and loyalty
I want friends that aren’t fake and won’t say my business
I want to make my parents proud.
I want to have fun, yet remain on the right track.
I want to be free from the patterns that control
my mind,
I want to learn how to deal with my pain and
my past instead of running away.
I want to live my dreams
I want to finish school
I want a steady career, a life
100,000 income a year, cars, freedom
I want things I know that
could never happen.

Just because I’m independent
doesn’t mean I don’t care about others
I remember once I saved a couple lives.

I remember when I first got this hairy
black and white thing  it was on
my bed in its pink furry bed.
Her eyes barely open already a spoiled princess
like all my mom’s girls

Just because I wave at
someone doesn’t mean I’m flirting
with them.

Just because I say you’re cute doesn’t
mean I like you.

Just because I say I’m tired doesn’t mean
I want to sleep.

Just because of what the mind
assumes it may not be what is
true.

I am grateful for a loving family and beautiful
relationship.
I am like a baby bird waiting for my chance to
fly away.

I love you no matter what.  You’ll always
be my little one.

I am like a child
with no worries or troubles.
Only of being stung by a bee
or falling over and scraping my knee.

I’m a star that doesn’t shine
because it’s dusted with shame.
I’m all my broken thoughts waiting
to be heard.

I am grateful for you but when you
bring me down I don’t know where to
go who to run to.  All I think about
is a world full of smoke, white powder,
pills and eyes full of red pain

I’m grateful everything happens for a reason.
I am like a caterpillar turning into a butterfly,
I can’t wait to see my full potential.

I am grateful for my parents’ undying, hardworking, crazy
love.
I owe them the world.

Even the impossible is possible.